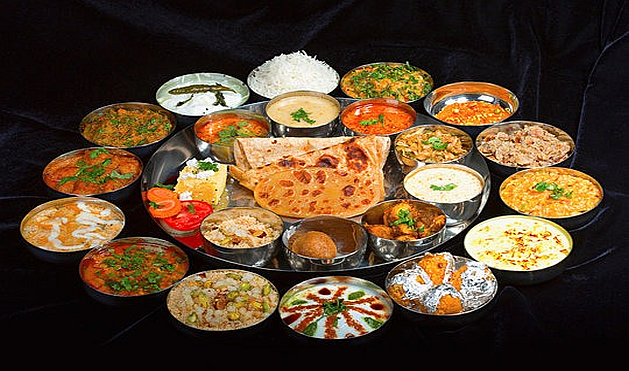 Rajasthani cuisine (Hindi: राजस्थानी व्यञ्जन) is the cuisine of the rugged Rajasthan region in North West India. It was influenced by both the war-like lifestyles of its inhabitants and the availability of ingredients in this arid region. Food that could last for several days and could be eaten without heating was preferred. Scarcity of water and fresh green vegetables have all had their effect on the cooking. It is known for its snacks like Mirchi bada and Pyaaj kachori. Other famous dishes include Dal Baati, malaidar special lassi and Lashun ki chutney (hot garlic paste), Mawa lassi from Jodhpur, Alwar ka mawa, Malpauas from Pushkar and rasgulla from Bikaner, "paniya"and "gheriya" from Mewar. The history also has its effect on the diet as the Rajputs preferred majorly a non-vegetarian diet while the Brahmin, Jains, Maheshwari, Vaishnavas, and other preferred a vegetarian diet. So, the state has a myriad of both types of delicacies.Rajasthani cuisine is also influenced by the Rajputs, who are predominantly non-vegetarians. Their diet consisted of game meat and dishes like laal maas (meat in red gravy), safed maas (meat in white gravy) and jungli maas (goat meat cooked with basic ingredients).