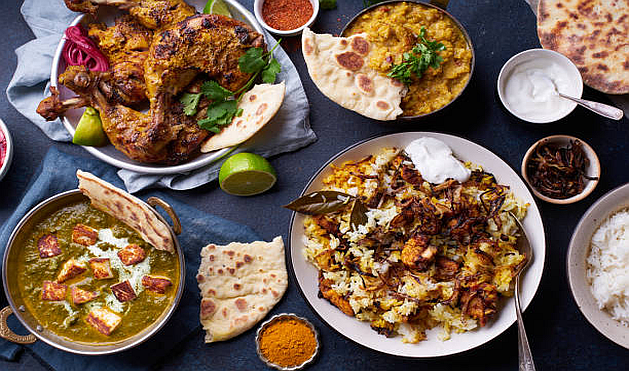 Hyderabadi cuisine, also known as Deccani cuisine, is the native culinary art of the Hyderabadi Muslims, which started to develop after the founding of the Bahmani Sultanate, and more radically with the foundation of the Qutb Shahi dynasty around the city of Hyderabad.As Hyderabadi cuisine began to develop further with the amalgamation of Mughlai, Arabic, and Turkish delicacies, blended with native Maratha and Telugu culinary traditions, it subsequently became a royal legacy of the Nizams, the erstwhile rulers of the State of Hyderabad.The unique blend of Mughal, Turkish, and Arabic cuisines, along with traditional Marathwada and Telugu preparations, is what makes the Hyderabadi cuisine so special. These varied influences and exceptional diversity basically make the Hyderabadi cuisine stand out in a country where food is a religion, worshipped and celebrated all over.The cuisine, mainly comprising of rice, wheat, and meat dishes prepared with various natural edibles, spices, and herbs, has different recipes for different occasions.The modern cuisine was evolved during the Nizams in the mid-17th century, and elevated to a sublime art form. Hyderabad has a history of continuous influx of migrants from all over the world and in general from the Indian sub-continent, particularly since 1857. Most of the foreign food had been improved to suit the culinary preferences, resulting to form the unique derivative cuisine that excels over the original. Biryani (Turkish) and Haleem (Arabic) for instance is prepared all over India, but the Hyderabadi variety is ultimately from the Hyderabadi Biryani and Hyderabadi Haleem. Til ke chatuni with Arabic tahini, Persian dried lamb with beans is modified with dalcha, tandoori naan of Uzbek (Central Asia) to create Sheermal. Most of the modern day desserts in Hyderabadi cuisine were introduced and invented during the times of Nizams, today that had become an integral part of cuisine.Hyderabadi cuisine is an integral part of the cuisines of the former Hyderabad State that includes the state of Telangana and the regions of Marathwada (now in Maharashtra) and Kalyana-Karanataka (now in Karnataka). The Hyderabadi cuisine contains city-specific specialties like Hyderabad (Hyderabadi biryani and Hyderabadi Haleem) and Aurangabad (Naan Qalia), Parbhani (Biryani and Tahari), Bidar (Kalyani Biryani) and others. The use of dry coconut, tamarind, and red chillies along with other spices are the main ingredients that make Hyderabadi cuisine different from the North Indian cuisine.