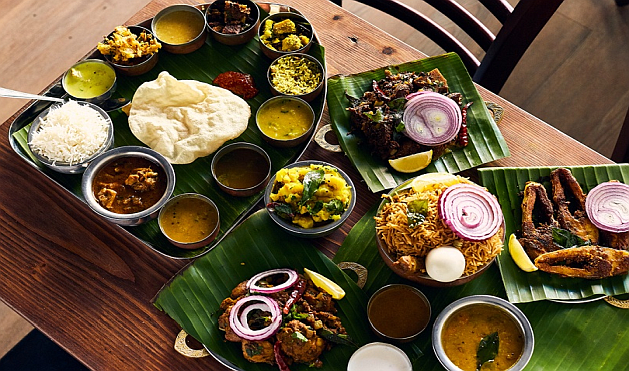 Malabar (Kerala) cuisine is a culinary style originating in the Kerala, a region in the south of India. Kerala cuisine offers a multitude of both vegetarian and non-vegetarian dishes prepared using fish, poultry and red meat with rice a typical accompaniment. Chillies, curry leaves, coconut, mustard seeds, turmeric, tamarind, and asafoetida are all frequently used.Kerala is known as the "Land of Spices" because it traded spices with Europe as well as with many ancient civilizations with the oldest historical records of the Sumerians from 3000 BCEIn addition to historical diversity, cultural influences, particularly the large introduction of Muslims and Christians, have also added unique dishes and styles to Kerala cuisine, especially non-vegetarian dishes. The meat-eating habits of the people were historically limited by religious taboos.Because of its rich trading heritage, over time various indigenous Kerala dishes have been blended with foreign dishes to adapt them to local tastes. Coconuts grow in abundance in Kerala, so grated coconut and coconut milk are commonly used for thickening and flavoring.Kerala's long coastline and numerous rivers have led to a strong fishing industry in the region, making seafood a common part of meals. Rice is grown in abundance along with tapioca. It is the main starch ingredient used in Kerala's food. Having been a major production area of spices for thousands of years, the region makes frequent use of black pepper, cardamom, clove, ginger, and cinnamon.Muslim cuisine or Mappila cuisine is a blend of traditional Kerala, Persian, Yemenese and Arab food culture. This confluence of culinary cultures is best seen in the preparation of most dishes. Kallummakkaya (mussels) curry, irachi puttu (irachi meaning meat), parottas (soft flatbread), Pathiri (a type of rice pancake) and ghee rice are some of the other specialties. The characteristic use of spices is the hallmark of Mappila cuisine—black pepper, cardamom and clove are used profusely.The Malabar version of biryani, popularly known as kuzhi mandi in Malayalam is another popular item, which has an influence from Yemen. Various varieties of biriyanis like Thalassery biriyani, Kannur biriyani, Kozhikode biriyani and Ponnani biriyani are prepared by the Mappila community.A favourite dish of Kerala Christians is mappas, or chicken stew. For this dish, chicken, potatoes and onions are simmered gently in a creamy white sauce flavoured with black pepper, cinnamon, cloves, green chillies, lime juice, shallots and coconut milk. In Central Kerala this is made only with beef or lamb, the usage of chicken in stew is very rare. Lamb and duck can replace chicken in the stew recipe.Pidi is another dish made mainly by Syrian Christians from Central Kerala (Ernakulam and Thrissur), consisting of dumplings made from rice powder boiled in a mixture of coconut, rice powder, cumin seeds and garlic.Other dishes include piralen (chicken stir-fried), meat thoran (dry curry with shredded coconut), seafood and duck curries, and meen molee (spicy stewed fish). This is eaten with appam.[16] Meen mulakittathu or meen vevichathu (fish in fiery red chilli sauce) is another favourite item.Latin christians in Kerala follow the Portuguese heritage and lifestyle. Bread and stew are served after cake and wine at the banquet, followed by a meal with fish, cutlets, salads, fish moli, duck roast and mustad (mustard and coriander skins fried in vinegar) are important in the diet.