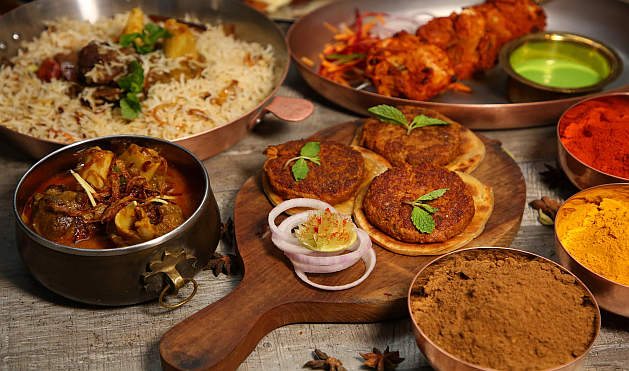 The bawarchis (chefs) and rakabdars (gourmet cooks) of Awadh invented the dum style of cooking or the art of cooking over a slow fire, which has become synonymous with Lucknow today. Their spreads consisted of elaborate dishes such as kebabs, kormas, biryanis, kaliyas, nahari-kulchas, zarda, sheermal, rumali rotis, and warqi parathas. The richness of Awadh cuisine lies not only in the variety of cuisine but also in the ingredients used like mutton, paneer, and rich spices, which include cardamom and saffron.Kababs of AwadhKebabs are an integral part of Awadhi. Lucknow is proud of its Kebabs. There are several varieties of popular kebabs in Awadhi cuisine viz. Kakori Kebabs, Galawat ke Kebabs, Shami Kebabs, Boti Kebabs, Patili-ke-Kebabs, Ghutwa Kebabs and Seekh Kebabs are among the known varieties.[citation needed]The kebabs of Awadhi cuisine are distinct from the kebabs of Punjab insofar as Awadhi kebabs are grilled on a chula and sometimes in a skillet as opposed to grilled in a tandoor in Punjab. Awadhi kebabs are also called "chula" kebabs whereas the kebabs of Punjab are called "tandoori" kebabs.Awadhi cuisine, although similar to Mughlai cuisine, differentiates on the methodology of cooking. Its uniqueness comes from the slow preparation and layering of flavour in dishes. Where Mughal dishes are rich in fats due to excessive use of milk, cream and spices, Awadhi food is more subtle with just handful of spices.